skip to main | skip to sidebar

As the summer has run away from me, July was just as busy as June, and only a few times did I get to photograph the birds that are around here.

Second-year Arctic Terns (Rødnebbterne) are few and far between, but I study them each time I see them to be able to separate them from other species if they should appear up here or somewhere on the Mainland. They dont look much like their parents, and are even more interesting!

The Barnacle Geese (Hvitkinngås) are increasing in numbers up here, and in amongst them are a very few individuals that look different. This is one of about Three leucistic (partial albinism) geese in this population. Often Ive been told that someone has seen a Snow Goose (Snøgås), but when I ask closer often it is one of these that has been seen.


On the 15th of July I actually got to see two of the leucistic Barnacles only minutes apart, and took photos of them to show the difference in appearance.


In July the Young birds of the season starts to appear, and I have to start Learning the appearance of them over again. And every year there is a very steep Learning curve.

Chasing after the little chicks on the tundra, trying to ring them is one of my favourite activities during late summer. This Ringed Plover (Sandlo) chick ran across the road in front of my car, and five minutes later it had ring and flag with code on it.

The Red-necked Phalarope (Svømmesnipe) is an uncommon breeder on Svalbard, and this year I found what is probably the only brood on the Island. These cute little chicks are allmost impossible to see when they are hiding in the grass.


When I had given the happy family some distance, the chicks hid in the grass and the father came flying next to me and landed on one of the smaller ponds.


Later in teh evening when all the tourists had left the valley, I headed back out and found the brood of Red-necked Phalaropes again. When the father had rounded all the three chicks up underneeth him I got the cahnce to ring the first brood of this species ever on Svalbard. They are, as with most wader-chicks, some of the most beautifull little creatures on earth!

The next day I did a late trip in the same area, and got the chance to ring this little beautifull baby Red Phalarope. This is a great opportunity to compare teh chicks of these two closely related species.


﻿
Of the birds that most birders who visit here want to see, the Ivory Gull (Ismåke) is often the one I am asked about. This pure white, medium-sized gull, is one of my favourites. I have gotten so used to it that most times that I see it I just think that its just another Ivory Gull. But one day while out looking for wader-chicks I found two adults feeding in the dogyard. I just could not let this opportunity disappear, and got out of my car with the camera. Both birds were showing really nice, even though I did not get the photo I wanted where one of them would be right in front of the sun. But who can complain when you have two beautiful birds alternating on flying around you, just a few meters away. I got to have a photo-session with one of the most prized birds up here, and I know there are a lot of perople who would be thrilled to have the same experience.
﻿

It is allways really nice to see my birds again after I have had them in hand. The Red-necked Phalaropes stayed in the same area for a long time, and I got to see the chicks grow, and I even got to see teh female in the pair start to change into Winter-plumage. Unfrotunately I did not get to photograph this, but I did get some other pics of the little family.

This summer has flown by quicker than I had ever imagined. This has led to way too few pictures, but I did manage to geta few that I am pleased with. I will post them chronological, and hope that you like the pictures and my stories.

The Common Eider (Ærfugl) is a beautifull bird that I often forget to photograph. The yellow bills, the black cap and the green neck of the males make them stand out amongst other ducks. I guess that the reason for not taking more photos of them is that they are so common up here.
The Glaucous Gull (Polarmåke) and the Arctic Tern (Rødnebbterne) are two other birds that I spend too little time admiring. Both are common around Longyearbyen, and both are declining in numbers. That is yet another reason for using more time on them. And, no matter what most people might think of them, in my eyes they are still beautifull birds!

The Arctic Skua (Tyvjo) is together with the other skuas at Svalbard the birds that have taken on the role as a raptor. Their skills in flying are amazing, and the sheer power they show when attacking, like this bird attacking a Glaucous Gull, truly amazes me!

I had heard from several people that they had seen Red-necked Phalaropes (Svømmesnipe) in the valley, but as usual the unusual birds that others see are eluding me. So when I got to see one I was thrilled. The bird was a bit jumpy, which is unusual for this species, but I did get at least one good photo before it flew off.

﻿﻿﻿﻿﻿﻿ The 29th of June gave me a view I will never forget, and luckliy I managed to get it on the camera. But I begin the day with these photos of a normal Red Phalarope (Polarsvømmesnipe) female.

After I had seen these female red Phalaropes, I was in for a true treat! I have seen many birds wich are gay, but this was something I had never thought I would see. All the gay birds I have seen up until now have been males trying to breed with males, but in front of me now were two female Red Phalaropes who were mating! Of the huge series of Pictures that I took I have chosen a few here wich shows two different mating attempts. If anybody can tell me that it is a male on top, please tell me. And if anybody have ever seen this in wild animals? ﻿This is definately one of the coolest encounters that I have had with any bird!

The stunning performance from the two female Phalaropes was maybe more of a big deal to me than to the American woman who was joining me this day. To her the best bird was the semi-tame Arctic Skua (Tyvjo) at the camp-site. This female is so used to humans that it doesnt mind sitting a few meters away. This is teh easy way to get great photos! :)


The next day I couldnt find the pair of Phalaropes, only this lone female. 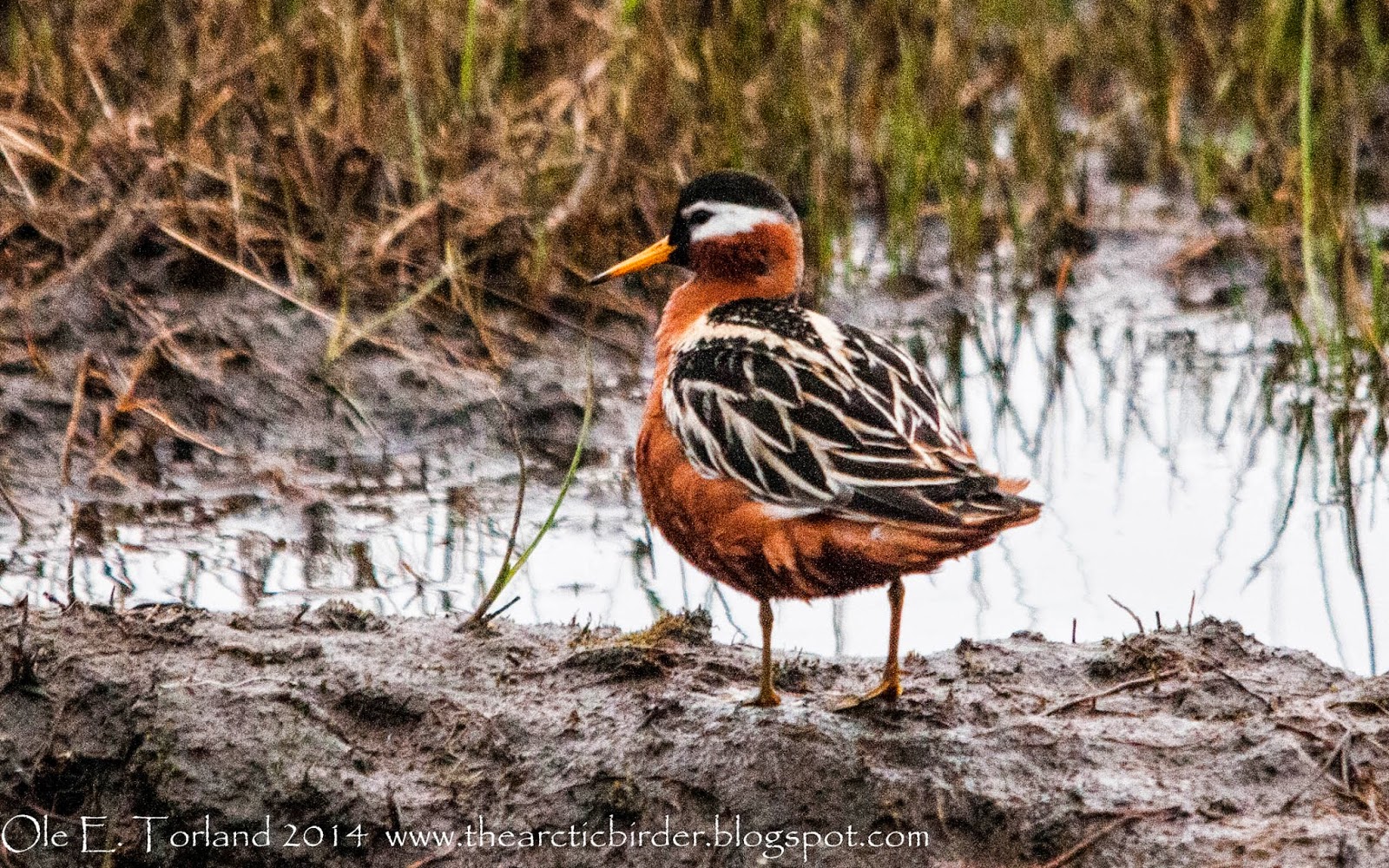 All the People I show around up here usually want to see the Svalbard Ptarmigan (Svalbardrype), the endemic subspecies of Rock Ptarmigan (Fjellrype). This pair woke me up in the early morning the day after I was out guiding and couldnt fins any!!! Typical......

About me and this blog.

Ole Edvard Torland
I am an eager birder who have moved to Svalbard and Longyearbyen, and spend as much time as possible out with my feathered friends. I will use this blog to tell all of you who visit this blog about the birds and other wonders of nature that interest me and that I manage to get photos of. If you are coming to Svalbard, or if you see an interesting bird while on Svalbard, please dont hesitate to contact me by giving a comment to one of my posts. If you are coming to Longyearbyen and would like to contact me for info on where to find the wildlife, please contact me on: ole.edvard.torland@gmail.com